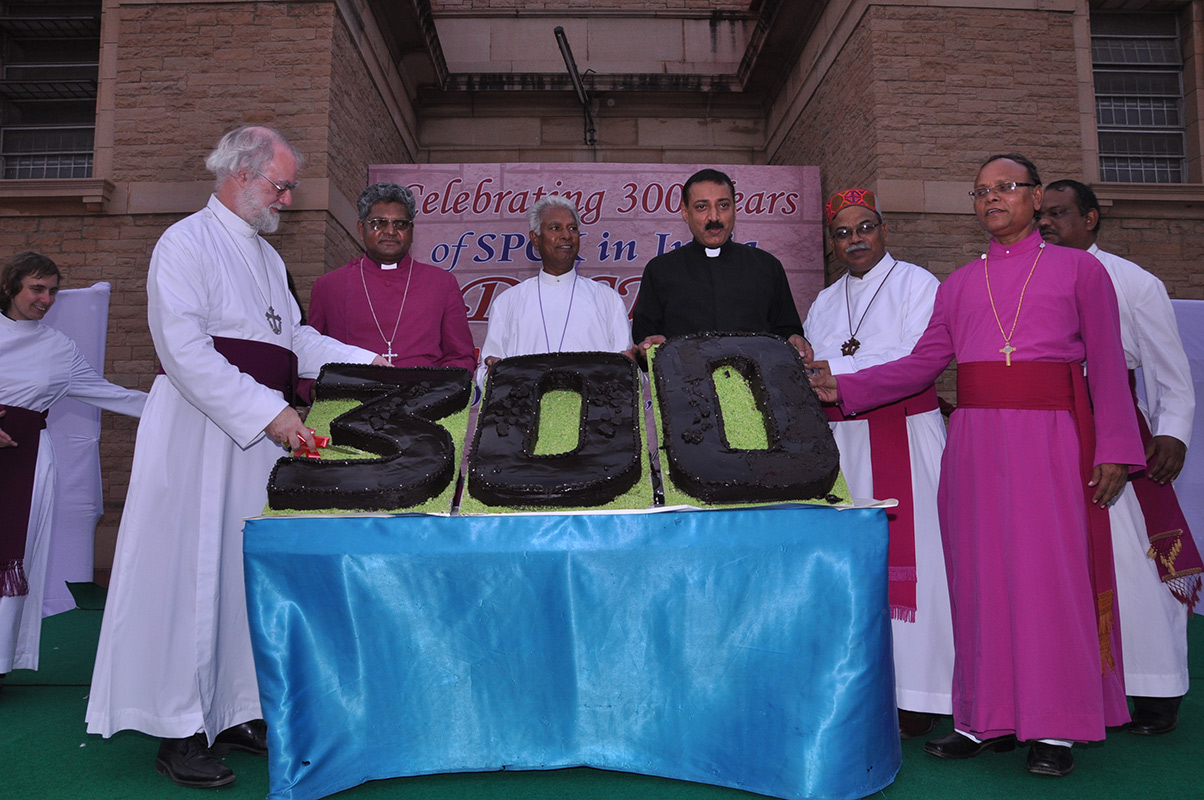 TERCENTENARY CELEBRATIONS Friday, 15 October 2010, witnessed over 750 people from around the globe thanking God for His faithfulness to the Indian Society for Promoting Christian Knowledge (ISPCK) which celebrated three hundred years of service to the Indian community at a Service of Thanksgiving at The Cathedral Church of the Redemption, 1 Church Road, North Avenue, New Delhi- 110001.

The Most Reverend and Right Honourable, Dr. Rowan Williams, Archbishop of Canterbury, lead this commemorative service assisted by the General Secretary of ISPCK Rev. Dr. Ashish Amos , the Moderator of the Church of North India Most Rev. Purely Lyngdoh, Archbishop Vincent Consesaao of Delhi and Rev. Dr. Richard Howell General Secretary Of the Asia Evangelical Alliance, Rt. Rev. Taranath Sagar, President National Council of Churches in India and representatives from the Vatican among several national church heads from across India. Mr. Simon Kingston, General Secretary, SPCK UK, and Dr. Davis Bunn an award winning novelist from Oxford University UK also participated in the celebrations. A 260 page volume of ISPCKs history was released by the Archbishop of Canterbury during the service and a cake was cut to mark three hundred years of the society by him followed by a spectacular cultural evening showcasing the communities the society had supported these past years. An exhibition was also inaugurated by the President of the society Most Rev. Dr. Purely Lyngdoh exhibiting the various ministries. This was followed by a two day Mission Conference at the India Habitat Centre with over 50 Missiologist and Theologians from USA, London, Ireland, Bangladesh, Sri Lanka and India discussing possibility of Mission engagements in the current global environment.

A special day cover was issued by the Ministry of Communication and Information Technology, Department of Posts, Government of India to mark the tercentenary.ISPCK Sunday was observed throughout the CNI, CSI and Mar Thoma on October 17th 2010.A publishing Institute on the theme Green Publishing a Christian response was also held from 18th to the 22nd Of October at the ISPCK to help publishers reduce their carbon footprint in the wake of the current global climate change and environment degradation. The SPCK was launched in 1710 as the fruit of missionary activity. Two German missionaries, Bartholomew Ziegenbalg and Heinrich Plutschau were commissioned by the King of Denmark to serve in India. It was an ecumenical enterprise undertaken by German and Danish Lutherans with the support of a British Society (SPCK).The ISPCK became an autonomous, self-governing body, no longer governed and controlled by the Society in London. It became a Society registered under the Societies Act of 1860 with its registered office in Kashmere Gate, Delhi.

Presently, the ISPCK is headed by Rev. Dr. Ashish Amos, who has served the organization for 29 years, building it as a premier indigenous Christian communication agency in the country while extending ISPCKs contribution to the larger society. ISPCKs corporate office is located in St. James Church Compound, Kashmere Gate, Delhi-110006. ISPCK also has 9 bookshops, 5 retail outlets, and 12 book-tables all over the country. "Envisioning a larger societal purpose has always been the hallmark of the ISPCK," declared Rev. Dr. Amos. "The distinct vision of the Society is to mould itself into a multi-faceted organization with promoting Christian knowledge and publishing being its core activity. On the threshold of celebrating 300 years of mission activity, the ISPCK endeavors to engage the Indian Church with the richness of knowledge required to generate spiritual wealth and bring in hope in the lives of all people who associate with it."The society has totally Indianised itself to serve the oppressed and marginalized of the country.